Historically, Broken Hill is an incredibly important town. It invokes the spirit of two great Australian themes, Outback and Mining. Considered an isolated mining city in the far west of outback New South Wales, Australia, the name comes from Charles Sturt who explored the area in the 1840s. He noticed barrier ranges which the town sits on and noted a broken hill in the middle of it. Now, this original broken hill has been long since mined away.

Approximately 700 million years ago thermal springs deposited silver on the ocean floor. Then, about 30 million years ago the Broken Hill ore body outcrops as the Barrier Ranges are uplifted and the ore body sits rusting. This fortunate coincidence of architecture and weathering turns the top of the hill into oxides containing silver, lead and zinc.

The early 1880s saw many hopeful finds of silver to the northwest of Broken Hill at Silverton and Umberumberka. In 1883, Charles Rasp collected samples of what he thought was tin. He later found that these samples turned out to be from rich lodes of silver and lead. It was almost two years before the ore body was discovered to be the largest and richest of its kind in the world. After Rasp discovered large deposits of zinc, lead, and silver the boom was on. He then laid the foundations in Broken Hill that took Australia from an agricultural country to an industrial nation. The “syndicate of seven”, McCulloch, James Poole, David James, Philip Charley, George Urquhart and George Lind, were led by Charles Rasp. These seven men came from diverse backgrounds, intellect and foresight to form the first mining company in Broken Hill Proprietary Company, now known as BHP, one of the largest mining companies in the world. You can see busts of the original ‘Syndicate of Seven’ outside the Broken Hill Council Chambers.

Broken Hill’s growth was then further aided by the creation of the Silverton Tramway Company which provided a link from Broken Hill to the new mines and the South Australian border. Several new mines developed in the 1920s, ensuring the continued growth of Broken Hill. As it was some distance from the nearest major river, the water supply in the Broken Hill area had to be transported by the Silverton train from 1888. A railway line from Sydney reached Broken Hill in 1927.

Today, after more than 125 years of mining, it is still the most important industry with street names like Sulphide, Cobalt, Argent, Chloride and Oxide make sure mining is never far from anyone’s mind. The world’s richest deposits of silver, lead and zinc are still being worked here, though zinc is of greatest importance. However, all of the mining operations are slowly being wound down and tourism and art are starting to play a role.

In the 70s and 80s, the dominant workers’ culture gave way to a local passion for the arts. Artists like Pro Hart and Jack Absalom, and films such as Mad Max 2 and Priscilla: Queen of the Desert was filmed on location in and around Broken Hill, giving the place a world-wide reputation on the silver screen. Art deco shop fronts welcome customers straight out of a bygone age, and all over town are monuments to men and women who suffered and died so the town could survive.

Broken Hill is a living museum, a time-capsule, an artefact, and a world-renowned mining city that overflows with nationally significant heritage and authentic experiences amid the iconic, accessible outback. This is the essential experience of Broken Hill – to be here is to discover a lost world.

You can find us here! 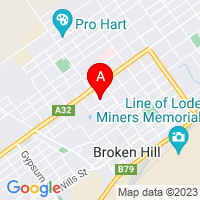